Did you know you can make your own ice cream with only a couple ingredients, none of which contain dairy? I love the texture and temperature of ice cream but would prefer to skip the animal products. This is precisely why I call it “nice” cream: cruelty-free and full of compassion. It was also quite cheap as I picked these blackberries off the side of the road (I love the bountiful berries come summertime in BC!).

Cow’s milk contains insulin-like growth factor-1 which may increase the risk of breast cancer. It can also spike insulin levels contributing to inflammation and acne, especially in women with PCOS. Plus, studies have shown milk consumption doesn’t actually decrease the risk of osteoporosis and may actually rob our bones of calcium due to its acidity. So give this non-dairy cold dessert (or breakfast) option a try and let me know your thoughts!

Some benefits of sipping green tea include stabilizing blood sugar levels and reducing high blood pressure. Matcha tea is a powdered form of green tea reported to have a much greater antioxidant content. Last month a study conducted in rats demonstrated that matcha may prevent blood glucose and lipid accumulation. Unfortunately, matcha has yet to be studied in humans.

Dr. Wajihah Mughal, a good friend and fellow scientist, wrote about the matcha tea trend on her blog Re-Spect Science. Our conversations about its promised health benefits (including the likely false claims) stirred us to take a closer look at the research. Read her post about the matcha hype, then give my recipe a shot!

A mini tropical oasis in the middle of winter could be at your fingertips. This was my first experience eating dragon fruit so I did some research. Dragon fruit is known as Pitaya roja in Central and South America, and Pitahaya in central Mexico. It is sometimes called “lady of the night” or “queen of the night” as its flowers only bloom during the night. Nutritionally, dragon fruit is recognized for its high vitamin C content and its ability to aid digestion. However, some other possible benefits of dragon fruit consumption may include cancer prevention, improved cholesterol profiles, stabilized blood sugar levels, and improved immune system functioning. I would love to hear your thoughts on this nutrient-rich breakfast in the comments below or via social media (Instagram, Twitter). 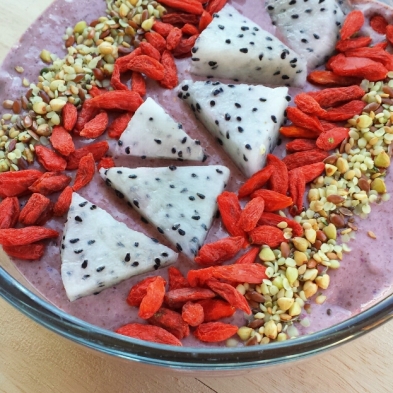